WHITEHORSE, YT, Nov. 30, 2022 /CNW/ - Minto Metals Corp. ("Minto" or the "Company") (TSXV: MNTO) today announced Lion Point Capital, LP ("Lion Point" or the "Significant Shareholder") has established a $100,000 automatic securities purchase plan ("ASPP") with a registered broker to purchase shares of Minto in the open market through the facilities of the TSX Venture Exchange ("TSXV") or other Canadian marketplaces at a maximum purchase price of $2.00 per share. The ASPP will be effective for a period of 12-months commencing on or about November 30, 2022 and ending on the earlier of on or about November 30, 2023, and the date on which a maximum of 100,000 shares of Minto have been purchased under the ASPP. 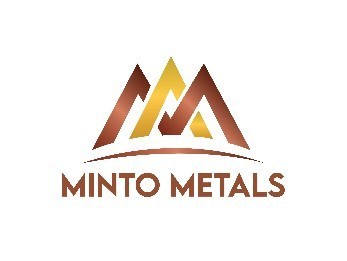 Purchases under the ASPP will be determined by the broker in its sole discretion, without consultation with Minto, having regard to the price limitation and aggregate purchase limitation and other terms of the ASPP and the rules of the TSXV. The ASPP allow shares of Minto to be purchased at times when the Significant Shareholder would otherwise be prohibited from doing so pursuant to securities laws and Minto's internal trading policies (collectively, "Blackout Periods"). Pursuant to the ASPP, the Significant Shareholder may not vary, suspend or terminate the plans more than once each calendar quarter during the term and such variation, suspension or termination must occur outside of a Blackout Period.

Under the ASPP, insiders are not permitted to exercise any further discretion or influence over how, when or whether the purchase of shares of Minto will occur. An ASPP can only be established when the insider participating in the plan is not in possession of material non-public information.

Transactions under the ASPP will be reported on SEDI in accordance with applicable Canadian securties laws.

Minto operates the producing Minto mine located within the traditional territory of the Selkirk First Nation in the Minto Copper Belt of the Yukon. The Minto mine has been in operation since 2007 with underground mining commencing in 2014. Since 2007, approximately 500Mlbs of copper have been produced from the Minto mine. The current mine operations are based on underground mining, a process plant to produce high-grade copper, gold, and silver concentrate, and all supporting infrastructure associated with a remote location in Yukon. The Minto property is located west of the Yukon River, about 20 km WNW of Minto Landing, the latter on the east side of the river, and approximately 250 road-km north of the City of Whitehorse, the capital city of Yukon.

Forward-looking statements are necessarily based upon a number of material factors and assumptions that, while considered reasonable, are subject to known and unknown risks, uncertainties, and other factors, which may cause the actual results and future events to differ materially from those expressed or implied by such forward-looking statements. Such material factors and assumptions include, but are not limited to that shares will be available for purchase in accordance with the terms of the ASPP.

There can be no assurance that such statements will prove to be accurate, as actual results and future events could differ materially from those anticipated in such statements. Accordingly, readers should not place undue reliance on the forward-looking statements and information contained in this news release. Except as required by law, the Company assumes no obligation to update the forward-looking statements of beliefs, opinions, projections, or other factors, should they change, except as required by law. The statements in this news release are made as of the date of this release.